Transport for London (TfL) has launched the world’s largest Cycling Infrastructure Database. The press release that accompanied the launch (TfL, 1 August 2019), notes that the Cycling Infrastructure Database (CID) contains the location of more than 240,000 pieces of cycling infrastructure in London, including places to park and the location of cycle lanes. Furthermore, to create the database, TfL surveyed every street in every London borough to collect data on all 146,000 cycle parking spaces across London, as well as gather information on 2,000km of cycle lanes, 960 traffic filters and 58,000 wayfinding signs.

A primary use of the data will be to facilitate improvements to wayfinding. The data has already been used to upgrade TfL’s own Journey Planner, meaning that people using the planner for cycle journeys can now see the nearest and most convenient place to park for every journey. Additionally, the data will offer valuable information to TfL and the boroughs for planning future investment in cycling effectively. Also, of course, the data will be of interest to us, as advocates of active travel, to identify issues relating to cycling facilities that currently do, or do not, exist.

The data from TfL’s Cycling Infrastructure Database is available to view and download directly from https://cycling.data.tfl.gov.uk/. However, all that data could be considered to be rather overpowering in its raw form (nerds and geeks apart). So, thankfully for many of us, our friends at CycleStreets have taken the data and mapped the lot (with the inclusion of full filtering controls) at bikedata.cyclestreets.net/tflcid. (If you are keen to read more about the technical side of things, CycleStreets have also reported on the Cycling Infrastructure Database in their blog, which includes a link to a new TfL CID project wiki page on the OpenStreetMap Wiki).

A snapshot in time, or a worthwhile, accurate, and dynamic facility?

According to CycleStreets, “TfL’s CID is a comprehensive and attribute-rich dataset of all cycle infrastructure throughout London. The data is a snapshot in time ranging between January 2017 and May 2018”. That would suggest that the data was, to a degree, out of date at the time of the launch in August 2019.

The best way to ensure that the data correctly reflects the constant changes that are made to the streetscape of London is for London local authorities to keep TfL informed of the work that is being carried out in their area. This obligation on the boroughs needs to be clearly stated and made known. We will be asking for details of the protocols that are in place to ensure that Sutton Council liaises with TfL, and provides relevant information for the database in the most effective manner, at the next meeting of the Cycle Forum. [Also see ‘What happened next?’ below].

When it comes to accuracy of the database, we can all help by providing feedback to TfL through the ‘Contact us about cycling form‘. The LCC also has a contact email address on the London Cycling Data page.

We have started things rolling by informing TfL of directional signs that appear to have been omitted from the database as currently mapped (and so possibly not recorded as part of the audit). Four such signs have so far been identified in the borough (see photos below), but there are likely to be others. 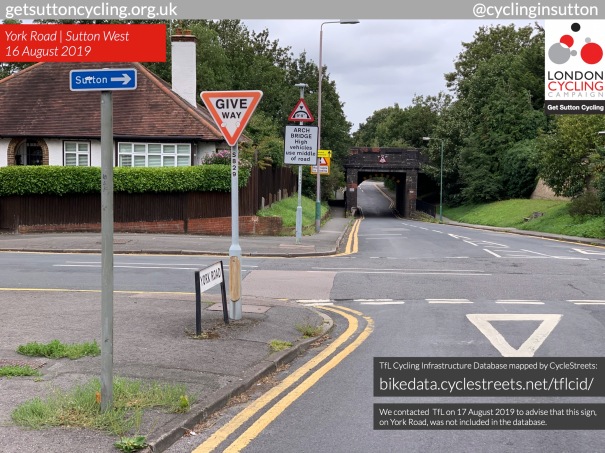 Meanwhile, Matlock Crescent by Abbotts Road, in Cheam provides an example of a location where a sign once existed but was subsequently removed and has yet to be reinstated. It is no surprise that this is missing from the database.

If you are aware of other missing ‘features’ from the database (or missing signs on the street), please let us know (details here), and/or use the TfL form.

Finally, it should be noted that although the database includes certain details of a particular cycling related ‘feature’, those details do not necessarily provide the degree to which the feature is useful, effective, or accurate. For example, details pertaining to the location and type of a sign do not report as to whether the sign is correctly aligned or whether it includes the most appropriate information. In Sutton, it could be suggested that around 25 per cent of all directional signs are currently mis-aligned. For this reason, the word ‘feature’, rather than ‘asset’, is arguably a better way of describing each element or component within the database. Of course, with the database now in place, it will be much easier to identify, and report, such anomalies (and get the information right in the first place).

Click here to explore the CycleStreets map of the TfL Cycling Infrastructure Database.

At the Cycle Forum meeting held on 16 September 2019, we asked whether protocols were in place to ensure that the council would submit details of any additions or changes to cycling features in the borough to TfL in order to ensure the integrity of the Cycling Infrastructure database. We were assured that there will be a process for this (a requirement for all local authorities across London), and that a ‘template’ to facilitate the transfer of information was awaited. Meanwhile, TfL were relying on LCC borough groups to provide details of any changes to features that had taken place since the original survey audit (January 2017 to May 2018) and now (late summer 2019).

Our thoughts on this: Good news about the protocol, but ideally the ‘template’ would have been made available at the same time as the survey audit to avoid the two-year gap in updates.