The headline, and overarching, vision of the Environment Strategy is that Sutton will be London’s most Sustainable Borough, noting that everyone has a role to play in reducing their impact on the environment.

The new strategy has five chapters (or themes), aligning with the Mayor of London’s Environment Strategy (May 2018). One of the five themes is ‘Cleaner Air’, the Action Plan for which is included in the Sutton’s Air Quality Action Plan 2019-2023 (subsequently published on 21 June 2019, Clean Air Day). The Vision for Cleaner Air includes the ambition that “the borough will be a place where walking and cycling short journeys is easy, pleasant and safe”.

This brief overview of Sutton’s Environment Strategy 2019-2025 focusses on the ‘Cleaner Air’ chapter. The simple reason for this is that the ‘Cleaner Air’ vision relates to tackling air pollution specifically from road traffic (the biggest source of emissions) and includes targets to increase the number of people walking, cycling and using public transport (and thereby reducing the number of cars on the road). This review also makes reference to the ‘Approval of Environment Strategy‘ report as presented to the E&N Committee on 7 March 2019 (Item 40, noting that the actual strategy features as Appendix A to this item).

The aim of the ‘Cleaner Air’ vision is to improve air quality in the borough by encouraging greater use of public transport, walking and cycling. The strategy reports that “reducing air pollution is one of the top three issues residents want the council to tackle“. There is recognition that too much traffic also causes congestion and can create barriers between communities. Furthermore, the strategy notes, “when people choose to drive rather than walk or cycle, this can mean they don’t do their recommended amount of exercise, which could affect their health“.

The strategy continues, “the council recognises that lots of people drive in Sutton because the public transport isn’t good enough, and the cycle network could be better. The majority of journeys made in Sutton are less than 3 miles in distance, and the focus will be on increasing the number of short trips people take by foot, bike or public transport, and improving our streets for this”.

To summarise the current situation:

Targets for the ‘Cleaner Air’ Vision

Develop and deliver an action plan for meeting the national air quality standards as soon as possible (as noted, a revised Air Quality Action Plan was launched on June 2019)

Some commentary on some of the targets

Clearly, we are going to have to try harder, and do things differently, if the current targets for this metric are going to be met. 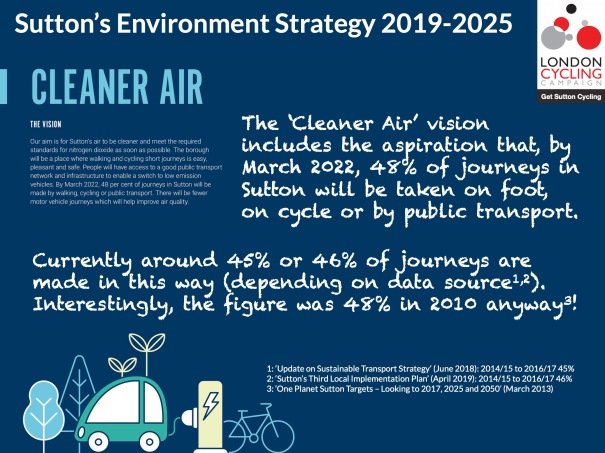 Interestingly, but not surprisingly, the baseline 2016 figure for the proportion of Sutton’s population living within 400m of the strategic cycle network is given at zero per cent. (This reflects the zero per cent noted in the third Local Implementation Plan, approved in April 2019).

The question that comes to mind when considering this target is, exactly what strategic cycle network are we talking about? Sutton’s existing, poorly signed, and disjointed cycle network can hardly be described as strategic in any sense, but certainly not in the sense of being high-quality. Therefore, the zero per cent baseline accurately reflects the situation. Cycling, as a means of transport for Sutton’s residents, has flatlined at around one or two per cent for at least the last three decades (noting that the borough’s 1999 Sustainable Transport Strategy reported that cycling accounted for 2% of the journeys made by Sutton’s residents in 1991).

What is interesting, though, is that if the existing ‘borough cycle route network’ in Sutton, as identified on the map below (reproduced from the third LIP, April 2019), was of at least the quality set out in the new cycle route quality criteria, then perhaps it could be said that over 50 per cent of the population already lived within 400 metres of a strategic cycle network. The target for 2041 is 37 per cent (see page 35 of Sutton’s third LIP). In that sense, the ambition for the longer-term future is not all that great.

Given the current baseline of zero per cent, it is very difficult to see how the 24 per cent target by December 2021 can be met. Even assuming that, by then, the Beddington North TfL Major Scheme would have delivered the 2 km or so of off-road cycle path, and that the proposed 3 km Cycleway, linking Sutton town centre and St Helier will be in place, these welcome initiatives will hardly reach out to 24 per cent of the borough’s population.

Despite these reservations, Get Sutton Cycling very much welcomes the borough’s new Environment Strategy 2019-2025, and fully supports the ambition for the borough to be a place where walking and cycling short journeys is easy, pleasant and safe. When it comes to cleaner air, members of the London Cycling Campaign in Sutton, and our supporters, are playing their part in reducing their impact on the environment. We know that many more people would like to be more proactive in doing their part too, and try cycling instead of driving fro some of their journeys, if the conditions were right. Those conditions are protected space for cycling, and low-traffic residential streets. Sutton’s Liveable Neighbourhoods bid, expected towards the end of 2019, will be a major step forward if it majors on the Healthy Streets checks.

The outcomes and ambitions of the Environment Strategy will be watched with interest. It is time to get a little bit tougher, and overcome the inevitable challenges, to ensure that this is a success story. We wish it well.