Green Wrythe Lane – one year on

The last few weeks have been quite significant in terms of the future for cycling in Sutton. Throughout the autumn some ideas for major cycling schemes on TfL roads, in part derived from our Space for Cycling ‘ward asks’ of 2014, were presented to councillors in five of the six Local Committee areas in the borough (see footnote [1] for more on this). In November, members of the Environment and Neighbourhood Committee approved Sutton’s draft Cycling Strategy. And it now looks likely that the final cycling strategy, which is to include changes from the draft version in recognition of some the responses we made in our response to the consultation, will be launched in the first few months of 2016. So, as we approach the end of 2015, things are definitely looking up.

Without wishing to undermine all this good news, it is perhaps worth reflecting once again on a particular cycling scheme that has given cause for concern over the last eighteen months or so. The scheme in question is phase two of the conversion of sections of pavement on Green Wrythe Lane to shared use for cycling (see links given in footnote [2] for extensive background on this). Given that this second phase of the scheme has been effectively completed (see footnote [3]), and in the knowledge that the third phase is not to go ahead after all (see footnote [4]), now would seem the right time to take one final look at Green Wrythe Lane.

The two photos below show the same viewpoint twelve months apart, and really tell you all you need to know on the delivery of this scheme. Can you spot the difference between the first photo taken October 2014 (prior to the conversion) and the second in October 2015 (after the conversion)? Apart from the removal of the hedges, and the addition of new fencing, there is not a lot to show on this particular stretch of pavement. It looks as though we were justified when we said this scheme showed a lack of vision (as well as aspiration) for cycling. Just “tokenism of the worst kind”. 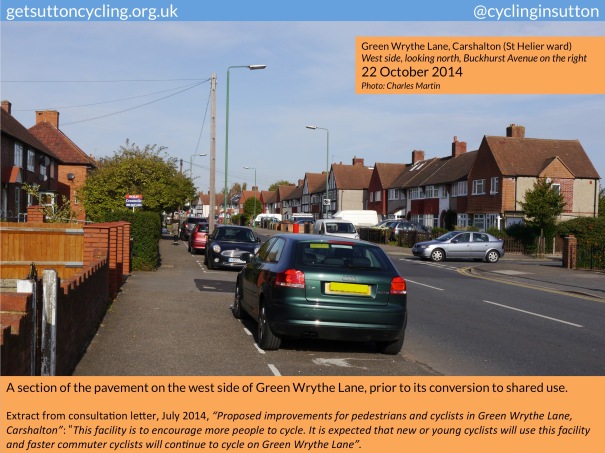 We don’t know how much phase 2 of the conversion of Green Wrythe Lane to shared use actually cost to implement. Even if it was considerably less than the indicative funding requirement of £100,000, as detailed in the Public Reports Pack, St Helier, The Wrythe and Wandle Valley Local Committee, of 3 July 2014, it surely cannot be considered to be of good value. Of course, the amount of default funding typically available specifically for cycling schemes in the borough each year (so excluding any additional bids made to TfL from the Mayor’s £1bn Vision for Cycling funding pot) of around £1.57 per head of population (about the price of three, second class, postage stamps this Christmas) does not help.

Unsurprisingly, Sutton is not alone when it comes to thinking pavements can be considered as cycling infrastructure, as Mark Treasure recently noted in Against shared use.

Before we draw a line under Green Wrythe Lane, it would be amiss not to reproduce the question that Cllr. Neil Garratt (Conservative, Beddington South) asked in regard to Green Wrythe Lane at the full Council meeting on 19 January 2015, and the reply he received. We would like to extend our thanks to Cllr. Garratt for taking the time to ask this question (and his related question on cycling at the same meeting, reported in Heart of Hackbridge and space for cycling).

To ask the relevant lead member, is the proposed shared footpath and cycleway on Green Wrythe Lane an example of good cycling infrastructure?

Bearing in mind the proposed new Sustainable Transport Strategy, is this indicative of the standard of cycling facility that this Council intends to adopt across the borough’s cycle network?

The design chosen for the cycle route along Green Wrythe Lane is considered the best practical option for that particular road, taking into account the narrow carriageway width, parking, trees, and the slope of the verge, which would make widening the road or providing a segregated cycle track costly and difficult.

In other areas, where space allows, we will be more ambitious, providing cycle routes with greater priority with wider segregated lanes. Future schemes will also be designed in accordance with the new London Cycle Design Standards, in close consultation with local cycling groups and TfL, and in anticipation of an increase in cycling rates.

In addition to the new Sustainable Transport Strategy, the council will be commissioning a new Cycling Strategy for the borough which will set out in more detail our approach to cycling and scheme design.

So, there we have it. Cllr. Colin Stears (Liberal Democrat, The Wrythe), on behalf of Cllr. Jill Whitehead (Liberal Democrat, Carshalton Central) said, in January 2015, that the council will be more ambitious and that future schemes will be designed in accordance with the London Cycling Design Standards (December 2014).

It’s time to move on. But of course, it is only time that will tell whether the Sustainable Transport Strategy (June 2015) and the Cycling Strategy (early 2016) will ultimately deliver.

Despite the outcomes of Green Wrythe Lane, the events of the last few weeks (with the possible exception of the decision on Rosehill roundabout, also in the St Helier ward), give us some cause to be quietly optimistic.

[2] The background to this is available in Green Wrythe Lane footway cycleway proposal – a lack of vision for cycling, along with updates in January 2015 and March 2015.

[3] “Effectively completed”, because it is not certain that all aspects of the scheme – specifically the proposals to move footway parking bays slightly so that they occupy less of the footway and part of the carriageway – have been, or will ever be, carried out.

[4] Council Officers confirmed at the Cycle Forum meeting on 8 December 2015 that the third phase would not now go ahead.

24 March 2015: A compromise is reached on Green Wrythe Lane