Home › Advocacy › Waalinden – If Wallington were in the Netherlands

Waalinden – If Wallington were in the Netherlands

Part of what we do in Get Sutton Cycling is imagine what we want our streets to look like. We ask questions such as ‘lots of short journeys in Sutton are made using cars – what sort of streetscape would enable and encourage more liveable lifestyles and allow people to walk and cycle’?

We often look to countries which have a high modal share for inspiration, and it was with this in mind that during a recent(ish) trip to the Netherlands I was interested to see if I could find anywhere from which Sutton may draw inspiration. I first looked to Amsterdam for comparison. Wallington is just a suburban town in London’s metropolis, which holds upwards of 8 million inhabitants. Amsterdam, however, only has a population of 1.6 million in its metropolitan area. It also grew in such a way that there was never a 1900-30s low density urban sprawl, which is when most of Wallington was built. Thus it has wide boulevards and the population density remains quite high, right up to the city’s limits.

Other Dutch towns and cities have all been designed or redesigned to have a bypass in order to remove through traffic from the centre. I was looking for a town where the high street also functioned as a route for through traffic, but that had a population comparable to Wallington’s 19000.

It was with this in mind that I found myself cycling through Valkanswaard, just South of Eindhoven. In geographical size it’s very similar to Wallington – From North to South along the N69 it is 2.44km, and East-West it is 2.69km along the N397 and Leenderweg. For comparison it’s 2.92km from Wallington Green to The Ridge, and 2.45km from Boundary Road to The Chase. Valkenswaard has a population of 30,000, and very importantly, the N69 goes straight through the shopping area.

Here is what the High Street looks like from the cycle lane.

It’s easy to see how well the street is designed.

Valkenswaard also has, like Wallington, a motor traffic free area running perpendicular to the main street.

It could be a nicer version of Wallington Square! Interestingly there is very little space for motor vehicles to park, and anyone wishing to make a delivery has to park in this small gap, such as the van in this picture. The sign makes it clear that the parking space is to be used for deliveries only. Presumably the drivers are very aware that they are parking in close proximity to the cycle track and are careful to avoid ‘dooring’ when entering and exiting the vehicle.

For comparison, here is what Wallington High looks like. 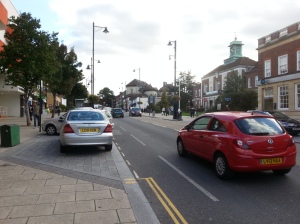 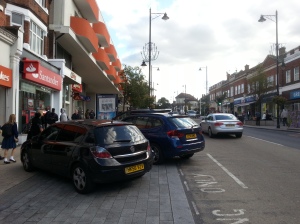 Despite Wallington having had considerable money spent on it a few years ago, the High Street has no good provosion for those who wish to cycle, and is blotched by egrious parking practices.

I also found an example of how the Dutch make a primary school interact with a relativly busy street. This is the street design outside Bandon Hill Meadowfield Primary School, on Sandy Lane South in Wallington.

A very wide road width but no provision for those who would like to cycle. How do the Dutch approach this sort of space? 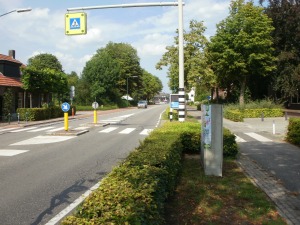 A much more controlled use of space with narrow traffic lanes which allow space for cycle tracks either side. No wonder 75% of Dutch students cycle to school!