As there were a number of changes involved I thought we could have a few different threads on this issue. Then considered a recent addition I had made to the notes:

Remember to use TFL’s SCA
https://lcc.org.uk/pages/strategic-cycling-analysis

So I started a thread specifically asking about how the SCA could be used in this response and set the image for the issue to a screenshot of the map from the Camden Cyclists tool:  “MTS Fig 1.3. Existing and planned cycle infrastructure with current and potential cycle demand shown”.

That thread was short lived, but was then joined by two others which brought focus on the two out of the four areas that were highlighted in that response.

It worked well. You can read the threads on Cyclescape but in summary our response came about on one thread using local knowledge, for instance the absence of a give way sign despite LBS engineers having said there was one and highlighting the junction was on the proposed North/South route in Wallington.

Also by sharing a personal response to the scheme helped a with the group’s.

And on the other thread Simon Munk of the LCC also added a point for further considerations LBS should make on one change which also made it into the groups response.

Basically, used well threads are good. A lesson learned could be make each area specific as a “general” one might distract and confuse leading to conversations that bounce between threads. Something I’ll keep in mind going forwards. 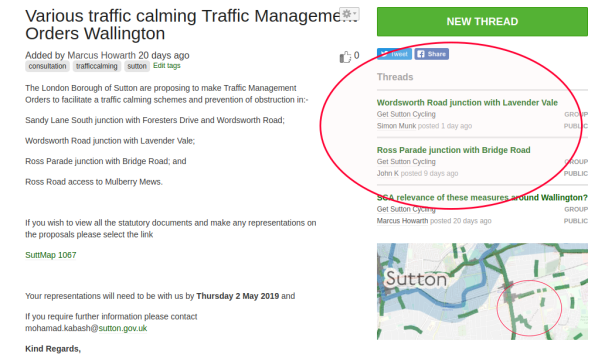 We’ve spoken about the ability to make some threads restricted in view to just members of the group rather than leaving public. There is of course the question “What have you got to hide?” which is very true. Although be aware we don’t seem to be able to delete or edit them once posted!

By leaving the discussions public it is visible for council officers to see too, which should help us engage more in the future.

Another thing that I’ve noticed in the past few weeks are the other options you get for adding not just text, but photos, maps and attachments in these discussions on Cyclescape.

We have started to use more images: screen shots of Plans; Google Street View; Google Maps Satellite views and attachments.

One problem we found with attachments (I believe it was when opening a .pdf with an iPhone) was there is no obvious way to return to the thread.

But otherwise I think these can help, certainly saves the reader having to go away to another screen to search for the same Street View or downdown the plan again.

Here are a few examples: