This feature is based on the article ‘My Liveable London’ by Fran Graham, published in ‘London Cyclist’ magazine, Spring 2018.

The ‘My Liveable London’ pledge

In the weeks running up to the 3 May 2018 London council elections, London Cycling Campaign and Living Streets members and supporters asked prospective council leaders to pledge to:

The campaign was a success across London, with 55% of the subsequently elected borough leaders committing to a high-quality Liveable Neighbourhood (including Ruth Dombey in Sutton) – see ‘Have your party leaders pledged to create a Liveable London?‘. There was general cross-party support too. In Sutton, the Labour, Green and Liberal Democrat party leaders took the My Liveable London pledge, with Tim Crowley for the Conservatives supporting Sustrans’ ‘Streets for People‘.

It is clear that there is ambition in Sutton to access TfL funding to transform an area in the borough into a place where people will choose to walk and cycle, and leave the car at home.

Our thanks to everyone who sent an email to the candidates in support of the campaign, and also to the party leaders for indicating their commitment.

Sutton, our borough, our life, now

Looking to the future, next week, next year, next generation

Now imagine Sutton, as a place where it’s enjoyable and safe to walk and cycle for all your local trips, where there are relaxing places to watch the world go by or chat with your neighbours, and where children can safely roam or ride to school. Imagine Sutton, as a place where our families, friends and communities are put first on our streets, and where motor traffic, pollution and congestion do not dominate our public spaces. Imagine Sutton where everyone can live well, breath easily, and move around in comfort.

That is the sort of place many of us have been working hard to build, and there are a few locations across London that are like this (although they are few and far between). Meanwhile, London’s councils are all grappling with illegal air pollution, rising congestion, an increasingly inactive and unhealthy population, and a growing isolation in out communities. All the more reason why we need to move towards a more liveable London, a more liveable Sutton.

And we need to progress now, for the sake of the next generation. 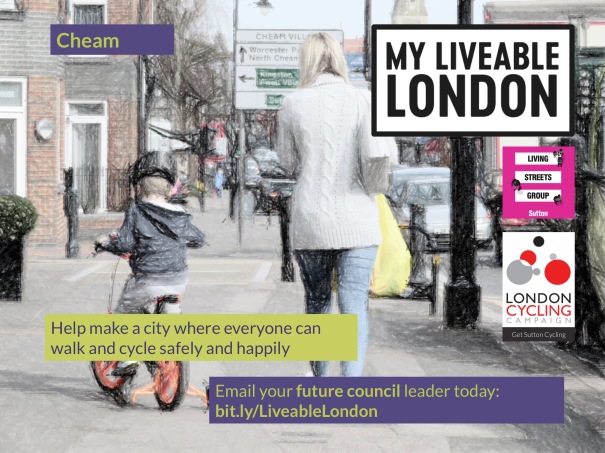 To help London’s neighbourhoods become more liveable, the London Cycling Campaign and London Living Streets are working together in the run-up to the local elections on 3 May 2018 with an initiative called ‘My Liveable London’.

‘My Liveable London’ is about challenging all thirty-two councils to reimagine our streets to prioritise people, and make it easier and enjoyable to walk, cycle and use public transport. Repurposing our roads in this way can cut rat-running, reduce traffic jams, revitalise high streets and improve air quality.  It will create more connected, inclusive, communities, making it easier for people of all ages and abilities to get around and enjoy our public spaces.

LCC borough groups across London are teaming-up with their Living Streets counterparts, to ask prospective council leaders to commit publicly to submit a high-quality bid for Liveable Neighbourhood Programme funding [1] (and, thereby, essentially show recognition that a new type of thinking is required to put into practice the theory of reducing car dependency and increasing active, efficient and sustainable travel). Tricky, perhaps, in the here and now, but essential for the future. 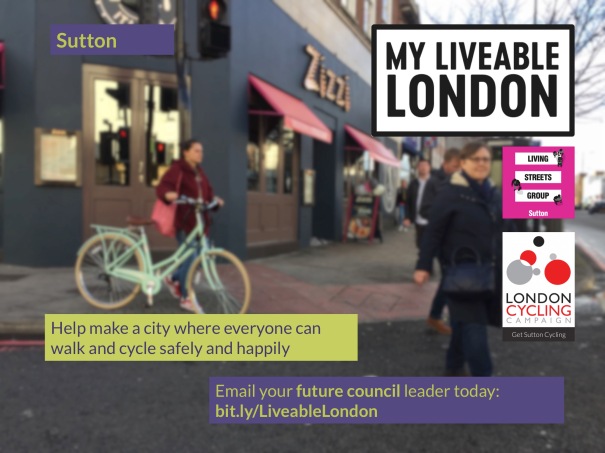 Why is ‘My Liveable London’ so important?

Here are just some of the reasons, in no particular order and in summary only, as to why it is important to challenge Sutton Council, and whoever is the leader of the council from 4 May 2018, to commit to submitting a high-quality bid to help start the process of change:

The right time for ‘My Liveable London’

The 2018 London council elections is the right time for ‘My Liveable London’ because:

The definition of a “high-quality” Liveable Neighbourhoods bid

The term ‘high-quality’ in the commitment is subjective, of course, so it needs a definition. London Cycling Campaign and Living Streets have agree seven standards, or metrics, to describe the term in the context of the pledge to commit to submit a Liveable Neighbourhoods funding bid. These standards are outlined in full on in The “high-quality” Liveable Neighbourhood pledge page of the LCC website. In summary, they are:

The London Cycling Campaign and Living Streets wrote to prospective council leaders early in April 2018 to ask them to commit to the ‘My Liveable London’ pledge. Now you get a chance to do so too, at My Liveable London.

5 Every breath we take: the lifelong impact of air pollution (Royal Collage of Physicians, February 2016) https://www.rcplondon.ac.uk/projects/outputs/every-breath-we-take-lifelong-impact-air-pollution

8 Traffic Congestion to Cost the UK Economy More Than £300 Billion Over the Next 16 Years (INRIX, 14 October 2014) http://inrix.com/press-releases/traffic-congestion-to-cost-the-uk-economy-more-than-300-billion-over-the-next-16-years/