Home › Advocacy › Back on two

The running gag of being a cross-borough cycle campaigner for Croydon and Sutton is that I don’t have a bike or cycle. The last time I cycled was over 6 years ago at Carsington Water in the Peak District. To be frank, the current road conditions around the two boroughs would not make me return to cycling straight away.

But then the perfect moment arrived. 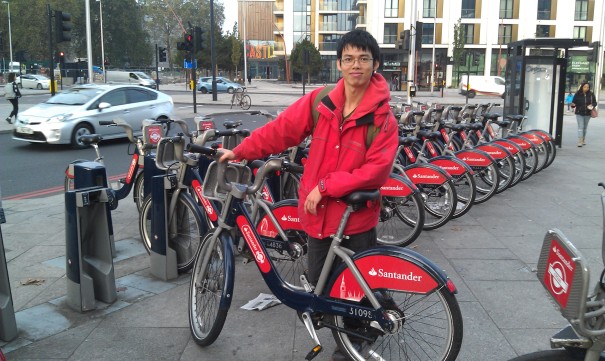 It was the day of the LCC AGM, and Charles, Ben and myself decided to ride along some of the cycling infrastructure along the way. We began at the docking station at Elephant and Castle, and after getting adjusted, we were ready to set off.

We crossed over the toucan crossings at the southern end to reach the cycle track opposite the station. We were well-separated from bus passengers thanks to a bypass with a spacious waiting area. However, there is a nasty blind spot as it curves round the London College of Communications.

We then reached a parallel signalised crossing to make our way onto CS6. The bidirectional track replaces a traffic lane on St George’s Road. It was a gentle and pleasant ride – not having to feel rushed, and a wide track that is well-separated from one way motor traffic. We did unfortunately have a van driver block the crossing at the traffic lights. It could perhaps do with some form of keep clear markings, however, the current setup is a significantly safer improvement upon its previous layout, where there wasn’t any cycling facilities or protection at the junction. 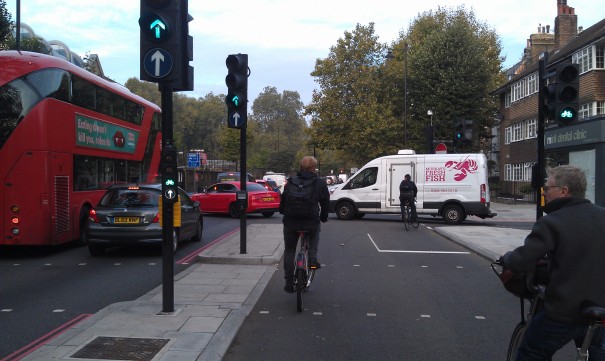 Some teething problems, but we’re at least protected from the mistakes by others unlike the previous layout. 20 Oct 2016 (M To)

The track briefly ends at Lambeth Road. While it would have been nice to continue the track to the next section, the road is relatively safe, as motor access is limited to terminating buses that do not come through here regularly. 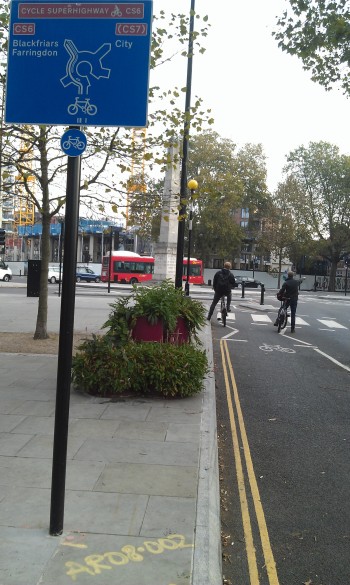 Through route only for cycles and terminating buses (southbound). 20 Oct 2016 (M To)

The track returns at St George’s Circus with parallel cycle crossings. Continuing along Blackfriars Road up the bidirectional track, we pass more bus stop bypasses. There is a also a significant buffer between the track and road, and at uncontrolled junctions, there is space for motor traffic to wait, as cycling gets priority. 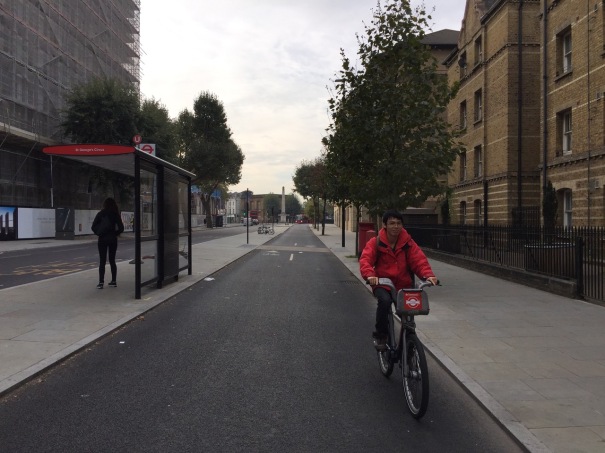 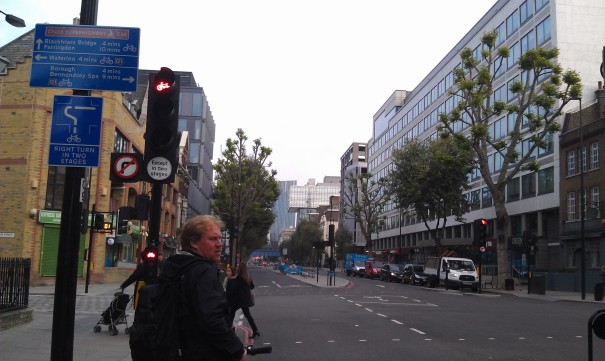 CS6 meets Q1 at Webber Street. The traffic lights have a two stage right turn, which feels rather inconvenient but thankfully, we were turning left instead. The road was slightly congested with construction traffic, forcing us to briefly dismount. There were also a lot of cars parked, and it would have been much better if residents / visitors parked them inside the estates, which were relatively empty. 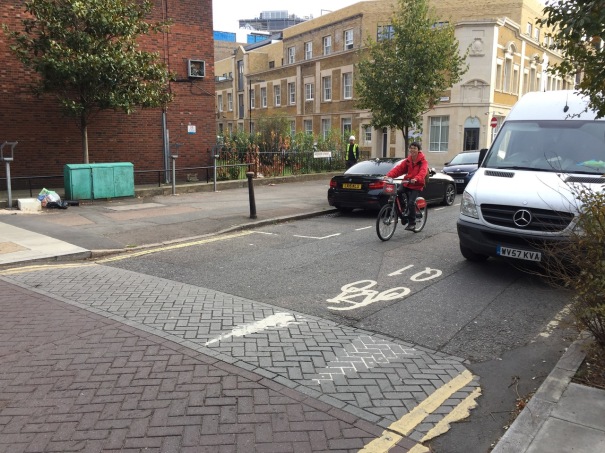 Cycle routes aren’t only unravelled via segregation on main roads. A plug no entry at the Queen Vic Theatre end prevents motor traffic from entering southbound. Cromwell Road is even quieter, calmer and safer thanks to filtered permeability by the railway bridge. All motor traffic has to use Waterloo Bridge Road. 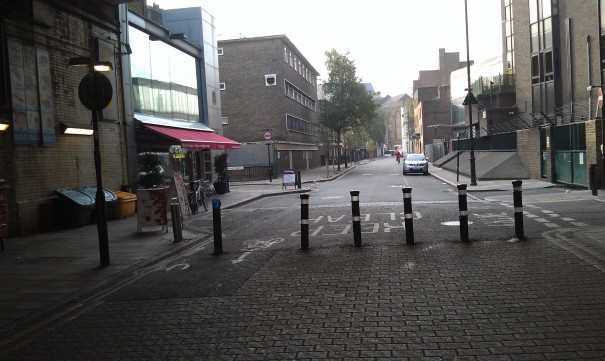 Our journey ended at Coin Street Conference Centre, and it was an enjoyable ride because I was enabled to. If local authorities want to make cycling an attractive mode of transport and increase the modal share, they need to go beyond offering training and advertising slogans. They need to change the environment. Those who already cycle will cycle, but those who don’t won’t.

Croydon doesn’t offer much. It has a few NCN routes and Q5, which is currently curtailed at A23 at Norbury. But perhaps something better may come soon. An ambitious new London to Brighton cycling route idea has already caught the attention of Croydon Council and Coast To Capital.

How far will progress go? 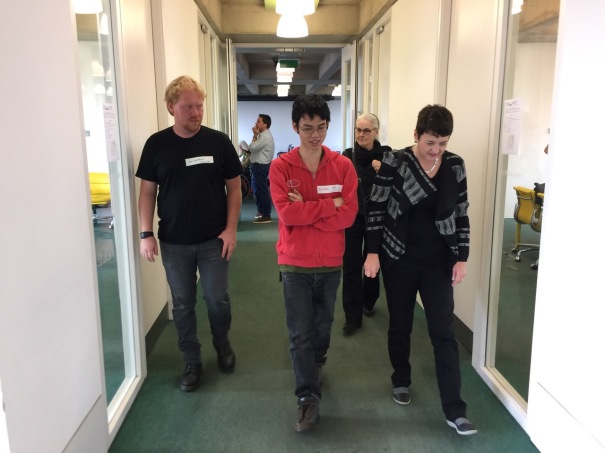 Discussing with Val Shawcross the possibility of protected cycleways along A23. 20 Oct 2016 (C Martin)

2 comments on “Back on two”