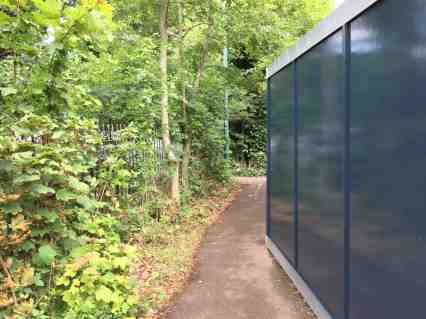 This is the Wandle Trail for cyclists near Corbet Close/ Hackbridge Road in Hackbridge. The blocks of flats behind the new green fence on the right are being redeveloped and the contractors have recently put up this fence that extends over part of the existing path. There is another narrow path at the water’s edge for pedestrians only – it is out of sight behind the hedge on the left. The cycle path in the photo was never very wide but now it is down to just one metre wide. I came face to face with a family of cyclists here today- fortunately, we were all cycling at a slow pace.
This needs watching – it is to be hoped that it is temporary. Keep your eyes peeled to make sure more parts of the path do not disappear in the redevelopment.
No doubt it would be very attractive for a development to be as close as possible to the water’s edge, especially since the river here has just been redesigned and replanted by the Wandle Trust.