Home › Advocacy › What will the new London Cycling Design Standards mean for Sutton?

What will the new London Cycling Design Standards mean for Sutton? 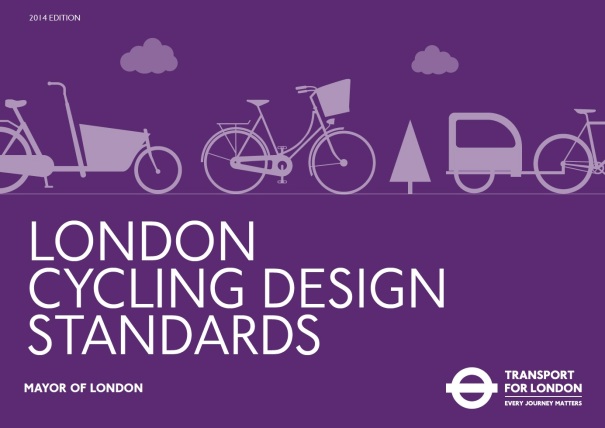 The cover to the London Cycling Design Standards (2014 edition)

As 2014 draws to a close it would probably be fair to say that those of us who are advocating transformative improvements for cycling in Sutton, improvements that could ultimately see cycling become a normal everyday activity for many of borough’s residents, are feeling quite upbeat. The reason for this is not that all of Sutton’s 54 councillors have suddenly, en masse, decided to show support for Space for Cycling. What a great Christmas present that would have been! No, the reason for the excitement is that late December saw the publication of two rather important and related documents, both of which provide inspirational sources of information on cycling. And if our ward councillors would care to take a look at these, they may more readily understand what all the current fuss around cycling is about and realise that supporting Space for Cycling in Sutton is actually the right thing to do.

The International Cycling Infrastructure Best Practice Study details the findings from a study tour of 16 cities, including Amsterdam, Berlin, Copenhagen, Dublin, Malmo, Munich, Nantes, New York, Seville and Utrecht. This study, carried out on behalf of Transport for London in 2013 by a team of consultants led by Urban Movement and Phil Jones Associates, was to help guide the preparation of the new London Cycling Design Standards. The design standards, and the study report, are available online at Transport for London’s cycling portal.

The LCDS, divided into eight chapters and running to over 300 pages, sets out requirements and guidance for the design of cycle-friendly streets and spaces. It is intended to be used by those who shape the environment through planning and street design, as well as by engineers designing cycle-specific infrastructure (so this includes Sutton’s ward councillors, as well as the traffic engineers and transport planners employed by the council).

Eight comprehensive chapters contained within the London Cycling Design Standards (2014 edition). The individual chapters can be downloaded from Transport for London.

The LCDS is all about delivering a step-change in quality, and reinforcing borough plans and strategies for promoting cycling. It’s about planning and delivering a London-wide network for cycling that meets with aspirations for infrastructure that is safe, comfortable, direct, coherent, attractive and adaptable. It’s about delivering a vision that will see cycling in London become an integral part of the transport network, and where cycling will become a normal part of everyday life.  In short, proposals such as those outlined by Sutton Council in the summer of 2014 for Green Wrythe Lane will no longer do.

But it is the final page of the International Cycling Infrastructure Best Practice Study document, Common Conditions, that holds the key to all of this. Cities that have experienced significant growth in cycling’s mode share in recent times, and which are committed to growing cycling (even from a low base), have several conditions that are common. Page 107 identifies eleven of them.

Pages from the International Cycling Infrastructure Best Practice Study (Urban Movement/Phil Jones Associates for Transport for London; December 2014) appended by the author of this post.

Top of the list of common conditions is “strong, clear political and technical pro-cycling leadership which is supported through all parts of the lead organisation”. It’s not new of course, political leadership formed one of the key recommendations from the Get Britain Cycling inquiry that reported in 2013. But it’s good to see that, even in terms of the delivery of cycling, it goes beyond being just a theoretical judgement, or “something that is worth having, but does not really matter”. It’s essential. Therefore, in the local context, before Sutton can “get cycling” (in terms of enjoyable, stress-free transport for many more people and better places for everyone) it will be necessary for Sutton’s councillors and traffic engineers to “get cycling” (in terms of aspiration, understanding and assessment of proposals).

Unfortunately, there has been little real evidence to suggest Sutton’s councillors see cycling as anything other than something that fit people do whilst wearing lycra, children do as a play activity in the park, or everyone else does on the pavement. An open letter sent to all councillors on 30 April 2013, for example, which endeavoured to outline why the time was right for cycling to be given greater priority, simply resulted in the following response from Cllr. Jill Whitehead, Chair of the Environment and Neighbourhood Committee the following day: “Thank you for your recent letter. We will be responding to you shortly in regard to the points you raise. Many thanks”. Twenty months on, and that further response is still awaited. In the meantime, Sutton was unsuccessful with it’s mini-Holland bid.

But perhaps things are, slowly, beginning to change. On 16 July 2014, Get Sutton Cycling requested a meeting with Sutton Council Leader Ruth Dombey to express our concerns over the lack of support amongst councillors in the borough for the Space for Cycling initiative. A meeting subsequently took place on 29 September and, although Ruth was not present, the Deputy Council Leader Colin Hall (Liberal Democrat, Wallington South) and Eleanor Purser (Executive Head of Economic Development, Planning and Sustainability at Sutton Council) attended, along with Chris Rutland and Charles Martin from Get Sutton Cycling. There were two promising outcomes from the meeting.

The ‘within a month’ declaration was clearly rather an ambitious announcement to make as, three months on, there is still no sign of the review. However, on 29 December confirmation was received that a date for the workshop had been set for Tuesday, 2 February 2015 (to coincide with Get Sutton Cycling’s monthly meeting). This is good news, but there is some disappointment that the E&N Committee’s strategic report on cycling will not precede the ‘ward asks’ review. After all, a statement of policy could actually set the context around which the review would be undertaken (in terms of feasibility and deliverability), as well as give an indication of the degree of aspiration.

With the publication of the International Cycling Infrastructure Best Practice Study, and the new London Cycling Design Standards, plus unprecedented funding from the Mayor (to those boroughs worthy of it), it’s less a case of ‘will’ Sutton get cycling, and more to do with ‘when’. And, of course, the ‘when’ depends on the degree of pro-cycling leadership and support within Sutton Council.

Our thanks again to the eight councillors in Sutton who have shown their support for Space for Cycling in 2014…..

…. but this leaves 46 councillors across Sutton who have not yet done so, including the Council Leader Ruth Dombey (Liberal Democrat, Sutton North) and Cllr. Jill Whitehead, Chair of the Environment and Neighbourhood Committee, (Liberal Democrat, Carshalton Central). The new London Cycling Design Standards, and International Cycling Infrastructure Best Practice Study, are definitely good reasons for them to reconsider. And with their support for the principles of Space for Cycling, the new London Cycling Design Standards could potentially mean a lot more for Sutton.